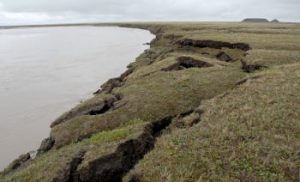 The SNAP data set was used to model climate forcing. SNAP data were derived from the five IPCC Global Circulation Models that perform the best in Alaska: ECHAM5, GFDL21, MIROC, HAD and CCCMA. These were selected based on how closely model outputs matched climate station data for temperature, precipitation, and sea level pressure for the recent past.

The outputs from these five models have been downscaled to 2 km resolution using the PRISM model, which accounts for elevation, slope, and aspect. Each derived value represents a single month within a given year, based on the composite (mean) output of the five models, using the A1B emission scenario.

Ground temperatures at the depth of the active layer for twelve decades from 1980-2100 were also calculated.

Results of the simulation show that by the end of the 21st century, the mean annual ground temperatures (MAGT) at the bottom of the active layer could be above 0°C within the vast territory south of 68° latitude North except for the high altitudes of the Alaska Range and the Wrangell Mountains.

At the same time, results show how different types of ecosystems affect the stability and thermal state of permafrost. While in the northern part of the Brooks Range areas of permafrost degradation have appeared by the end of simulation period, some patches of stable permafrost still could survive in interior Alaska.