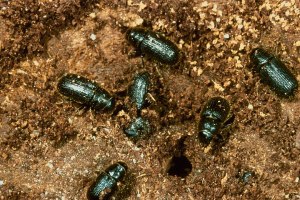 How does survivable habitat for the spruce bark beetle (Dendroctonus rufipennis) change in forested regions of Alaska under future climate conditions? What areas are at risk for more damaging spruce beetle population levels?

Throughout forested regions of Alaska, spruce beetle populations have historically been kept in check by a combination of climate conditions that include cool summers that prevent maturation in a single year, rapid fall cooling, and extremely low winter temperatures.

We aim to determine how changes in summer, fall and winter temperature regimes may affect spruce beetle population growth and survival, and thus determine the climate-linked potential for increased damage to standing live trees in Interior Alaska.

Previous studies have looked at temperature-linked impacts by season, but no prior modeling efforts have attempted to link summer, fall, and winter impacts at the landscape level. Nor have prior efforts included projections of future climate.

Using historical climate data, projected climate data, records of past beetle activity in Alaska, and published literature on beetle reproduction and survival, we are creating a model that explores future climate-linked beetle risk.

Study area includes forested areas of Alaska as defined by USDA/USFS maps. Note that not all regions defined as forested are dominated by host tree species (white spruce and Sitka spruce), and that our model does not take forest composition into account.

Our goal is to share our results publicly online in a format that is useful to land managers, landowners, and the public. Thus, we are planning to add our beetle models to a flexible new online tool, Northern Climate Reports, which currently includes a variety of visualizations and data access for temperature, precipitation, permafrost and wildfire/vegetation.