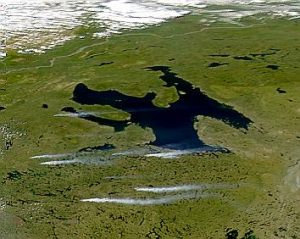 Northern Canada is undergoing rapid changes. Substantial warming has occurred at high northern latitudes over the last half-century. Fire patterns are changing, permafrost is thawing, and Arctic summers are now warmer than at any other time in the last 400 years.

Most climate models predict that high latitudes will experience a much larger rise in temperature than the rest of the globe over the coming century. At the same time, the region is undergoing changes in human population and demands on natural resources. These changes mean that maintaining the status quo in operations and management of resources and growth may result in increased costs, risk, and resource damage. Future planning that accounts for these changes can avoid or reduce these potential liabilities.

Déline Renewable Resources Council worked with SNAP to assess the impacts of climate change on the aquatic ecosystems of Great Bear Lake and its watershed. Great Bear Lake lies between the Kazan Uplands portion of the Canadian Shield and the Interior Plains. The lake empties through the Great Bear River (Sahtúdé) into the Mackenzie River. The community of Déline is at the southwest end of the lake. The lake is renowned for its lake trout, arctic grayling, lake whitefish, and arctic char.

Watch a video about the project.

SNAP contributed data and scenarios to the project, including:

What we found and what this may mean

Overall, the Great Bear Lake watershed is expected to become much warmer in the middle and latter portion of this century, with a longer growing season, shorter and less severe winters, and a deeper active layer in soils. Some increases in precipitation are likely, and complete permafrost thaw may occur in limited areas.

Due to the complex interrelationships between variables, it is not entirely clear how these changes will play out in terms of changes in drainage, water availability, vegetation, fish, wildlife, and human uses of the landscape. However, it is likely that most, if not all, of the watershed will experience some degree of stress to existing plant and animal species due to climate changes.

See the final report for full results of this assessment.