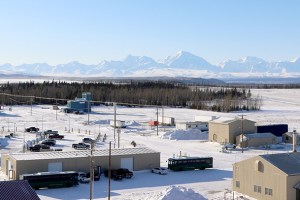 Climate change is already impacting the 1.6 million acres owned and managed by The U.S. Army Garrison Alaska (USAG Alaska). This change is projected to continue throughout this century, and will affect the infrastructure and training capabilities of USAG Alaska. Army installations in Alaska have significant responsibilities for managing environmentally sensitive natural resources.

Climate change already is affecting the built environment, including Department of Defense (DoD) built and natural infrastructure. This infrastructure is necessary for military readiness and daily operations. Thus, clear, well-supported, contextual information is needed on appropriate and applied use of climate information for non-experts. This information should be based on the best and most up-to-date models and analysis.

The goal of the project was to select, develop, and apply relevant data and models of historical, current and projected future climate, in order to create tools and adaptation strategies directly useful and pertinent to US Army Alaska training.

In the first stage of the project, scientists, modelers, and spatial analysts affiliated with SNAP met with key USAG Alaska personnel in a series of meetings, augmented by one-on-one phone conversations and extensive exchange of emails, documents, and other information sources.  In the second stage of the project, SNAP personnel created and refined maps, tools, datasets, and informational resources to directly meet the needs defined in the first stage.

This was an analysis of potential changes in the timing of sub-surface freeze and surficial thaw, as related to the viability of heavy and light training operations in wetlands and tundra.

Creation of a model to assess the future of frozen ground travel on military lands under a changing climate extensive literature review and modeling using SNAP climate projections and GIPL permafrost data.  Key questions included 1) determining the bearing strength of frozen soils at various depths; 2) estimating the current and long-term future seasonal timing of the freezing of these soils to sufficient load-bearing depth to allow for free passage of the heaviest vehicles; and 3) estimating the current and long-term future seasonal timing of surface thaw.  Given that the heaviest vehicles are most likely to be the limiting factor for frozen ground travel, Stryker vehicles were used as the obvious case study.

This was a modeling effort directed toward predicting the future likelihood of opportunities for cold-weather testing, as defined by varied requirements for extremity and duration of cold.

Temperature threshold modeling was dependent on the downscaling (quantile mapping) of daily and hourly climate projections.  Quantile mapping and the background data and methods necessary for this undertaking are described in detail in Lader et al. 2017.

This was a broad look at landscape level fire in areas surrounding military lands, in order to assess future impacts and risks associated with fire-fighting and smoke.

Long-term fire modeling was undertaken using the most recent iteration of ALFRESCO (Alaska Frame-based Ecosystem Code).  ALFRESCO simulates the responses of vegetation to transient climatic changes (Barrett et al. 2012; Rupp et al. 2000). The model assumptions reflect the hypothesis that fire regime and climate are the primary drivers of landscape-level changes in the distribution of vegetation in the circumpolar arctic/boreal zone. Furthermore, the model assumes that vegetation composition and continuity serve as a major determinant of large, landscape-level fires.

This was a modeling effort based on new daily weather projections, with the goal of highlighting which parts of each annual fire season, in the future, might pose the greatest risks of fire-related shut-downs or limitations to operations.

For this modeling effort, we used dynamically downscaled 20km hourly data for Alaska (Bieniek et al. 2016). The goal was to create climate projections that could be used in conjunction with the Canadian Forest Fire Weather Index System (CFFWIS).  This index system is statistically derived to relate meteorological variables with boreal forest fuel and fire behavior.

Frozen Ground Travel: A clear trend is demonstrated, both historically and in future time periods, toward a loss of frozen ground.  For example, from a starting point with over 160 days of deeply frozen ground, Yukon Training Area is projected to end this century with fewer than 120 such days under either climate scenario.  Black Rapids, already just below 120 days in the 1960s, is projected to end up with approximately 60 days of potential winter accessibility by 2100 in the best-case scenario, and only about 40 days in the more extreme warming scenario.

Temperature Thresholds: Although plenty of opportunities for below-freezing (below 0°C) testing are likely to remain throughout the century in all modeled locations, results show that opportunities for testing at colder thresholds may become rare or nonexistent.

Long-term Fire Modeling: ALFRESCO modeled data suggests that although fire in this century is likely to be more frequent and more extensive than in the previous century, there may be some leveling off or even decreasing of fire behavior toward the latter part of the century.  This is likely due to reduction in flammable forest after frequent fires.  Eventually, a new equilibrium may be reached in which the landscape has a higher percentage of younger and less flammable vegetation such as hardwood species (primarily birch and aspen) and a lower percentage of older black spruce.

Each research element and modeling effort in this study was both independent and interrelated, yielding a complex picture of the potential future of military operations and military planning in Interior Alaska under a changing climate.