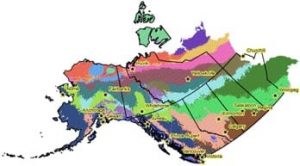 “Cliomes” are broadly defined regions of temperature and precipitation patterns that reflect assemblies of species and vegetation communities (biomes) that occur or might be expected to occur based on links with climate conditions.

Cliomes differ from actual biomes, since actual species shift incorporates significant and variable lag times, as well as factors not directly linked to climate. However, results serve as indicators of potential change and/or stress to ecosystems, and can help guide stakeholders in the management of areas of greatest and lowest resilience to changing climate.

Final project results and data are intended to serve as a framework for research and planning by land managers and other stakeholders with an interest in ecological and socioeconomic sustainability. Project partners include:

Further input was provided by stakeholders from other interested organizations.

The AK Cliomes and Ca Cliomes projects modeled projected shifts in climate-biomes based on current and historical climatic conditions and projected climate change. The 18 cliomes used in this project were identified using the combined Random Forests™ and PAM clustering algorithms, which are defined by 24 input variables (monthly mean temperature and precipitation) used to create each cluster. They were also assessed via comparisons with four existing land-classification schemes for North America (NALCMS Land cover, AVHRR Land cover, GlobCover 2009, and a combination of the Unified Ecoregions of Alaska described by Nowacki et al. 2001 and Canadian Ecozones). We used Random Forests™ to model projected spatial shifts in climate-biomes, based on SNAP projections for monthly mean temperature and precipitation for the decades 2001–2009, 2030–2039, 2060–2069, and 2090–2099.

We used climate projection data from SNAP and input from project leaders and participants to model projected changes in statewide climate-biomes (cliomes). We primarily used SNAP climate model data based on downscaled global projections, which provided baseline climate data and future projections. We analyzed these data using the Partitioning Around Medoids (PAM) clustering methodology, which defined regions of similar temperature and precipitation based on a Random Forests™ generated proximity matrix. Each cluster was used to define one cliome. Thus, for the purposes of this project, clusters are synonymous with cliomes.

We then used the Random Forests™ algorithm to take the PAM classification and predict spatial configuration of the cliomes given a changing climate. Alaska and the Yukon were modeled at 2km resolution. These fine-scale data are not available for NWT, so outputs for this territory are at 18.4 km resolution. For all areas, we addressed the inevitable uncertainty of climate projections by analyzing outputs for five different downscaled General Circulation Models (GCMs) as well as for a composite (average) of all five, and for three different greenhouse-gas emissions scenarios (B2, A1B, and A2).

We analyzed all outputs for resilience (defined as lack of projected cliome shift) and vulnerability (defined as multiple cliome shifts over time). The most resilient regions are projected to be the coastal rainforest of southcentral and southeast Alaska, and the most vulnerable areas are projected to be interior and arctic regions, with the exception of the islands of the NWT. However, these conclusions may be affected by the relative dissimilarity of the coastal rainforest to any other cluster in North America; species change may be less there simply because surrounding cliomes differ so greatly.

We can expect profound changes across the study area, with most regions experiencing at least one cliome shift by the end of the century, and some areas shifting three times. Although results differed according to which GCM was used and which emissions scenario was selected, general patterns of change were relatively robust. These patterns involved a northward movement of cliomes, with arctic clusters shrinking or disappearing, interior boreal and taiga clusters shifting, and clusters currently found only outside of the study area appearing in Alaska, the Yukon, and the Northwest Territories.

Cliomes currently typical of the central and southern potions of British Columbia, Alberta, and Saskatchewan are likely to become prevalent in a large percentage of the study area. This can be interpreted as a high likelihood for changing precipitation/temperature conditions, which may be beneficial to some existing plant and animal species and placing some under high stress.

The ramifications of these projected changes for land managers and local residents are varied, and depend on the mandates and goals of the organizations and agencies involved. By linking species-specific data and local details of landscape ecology to these projections, land managers can make informed decisions about how to proactively adapt to a changing landscape.