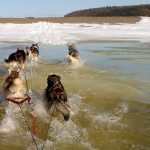 The Arctic and sub-Arctic are warming almost twice as fast as the rest of the world. As a result, people traveling across Interior Alaska are encountering climate-related changes in the environment that are challenging their traditional access to important local resources. There are almost no roads in this region, so travel is mostly by boat and four-wheelers in summer, and by snowmachines or dogsleds in winter.

Between 2016 and 2017, 26 observers from nine communities in Interior Alaska documented climate-related environmental conditions that were affecting their travel to areas used for hunting, fishing, trapping, and gathering. These conditions included ice, snow, erosion, sedimentation, water levels, vegetation composition, and weather.

A total of 746 observations were recorded during a one-year period. Observations included photos and descriptions of environmental conditions affecting travel and access. Observers were interviewed to capture environmental effects—such as conditions that would inhibit travel altogether—that may not have been captured in a photo.

These observations have been assembled into a compelling story that includes seasonal observations and accompanying photos interspersed with maps overlaid with Alaska climate data. Here, we present the myriad ways in which things have changed—and continue to change—for the residents of Interior Alaska.

See story, graphs, and photos of what observers reported

Interviews with subsistence users from other regions reveal a similar pattern

Rural Alaskans are talking about how unpredictable the weather is now, and how that makes it harder to get out on the land.

Those are exactly the kinds of issues SNAP biologist Todd Brinkman and his team found when they set out to assess the impact of climate change on subsistence use. “Our take-home finding was relatively surprising, in that we found that climate effects on the environment are having the largest impact on people’s ability to travel across landscapes and access these resources,” Brinkman said.

Brinkman and his colleagues conducted interviews in four villages — Wainwright and Kaktovik on the Arctic coast; and Venetie and Fort Yukon in the Interior — for a paper published this fall. Residents told them ice is thinner. Rivers are shallower. Permafrost is deteriorating. The biggest problem is just getting places.

—Excerpted from From rotten ice to wildfires: hunting and fishing become complicated in a changing Alaska by Rachel Waldholz, Anchorage Daily News