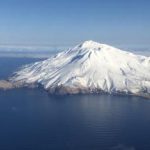 This work won a federal Small Business Innovation Research grant. This project amounted to $1.3 million in funding to improve the forecasting of airborne volcanic ash. The model also resulted in a patent for UAF on this project.