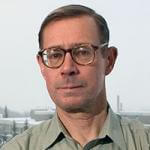 Dr. Walsh has been central to IARC’s success and public profile, leading many of the organization’s strongest research and outreach efforts. In addition to extensive publications, he is the co-author of the textbook Severe and Hazardous Weather.

His research has long focused on Arctic sea ice, and he has recently worked to establish a long-term sea ice database for use in a formal, searchable Sea Ice Atlas interface. The research group for this project has established a common-format background for sea ice levels back to the 1850s, and has examined the ability of models to simulate changes such as the recent rapid loss of summer sea ice.

The official assessment efforts to which he contributes serve to evaluate, integrate, and communicate recent science research, primarily for public leaders and decision makers. He aims to provide a balanced perspective on Alaska’s recent changes in the face of both growing interest and comparatively sparse data resources in the region. In these assessments, Walsh and others have synthesized information about changes in growing season length, temperatures, and extreme events—all integral to the understanding of climate change in the Arctic.

Dr. Walsh has also served as a contributor on the subject of ongoing Arctic changes to a number of official reports, including the 2013 US Global Change Research Program (USGCRP) National Climate Assessment (NCA), for which he was a Convening Lead Author in Climate Change Science.